Along with a 25 year long stubborn and determined effort of Member Coolie families to switch from field crops to tree crops, the Marcus Fund was an important precursor to the impressive Farm Forestry project that is currently being implemented as an Afforestation/Reforestation (A/R) CDM Project.

Climate Change has a significant impact on agricultural activities in semi-arid drought prone regions. With scanty, erratic and spatial rainfall, field crops fail. From the mid 1990's we suggested that Member Coolie families plant fruit and fodder trees on their scattered rain fed holdings and switch from risky, rainfall dependent field crops, to more hardy tree crops that do not need timely rains.

From 1996 to 2007, they put aside small patches of their land to plant tamarind and mango saplings. Except for technical assistance to procure good saplings, ADATS did not have the money to help with anything material. With their own resources, participating families planted a total of 74,254 saplings, but the survival rate was very poor at 26%. 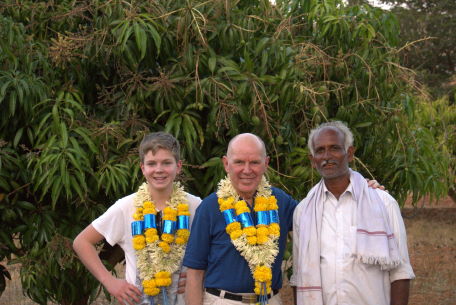 Alf Bjørseth of Scatec AS, Norway, stepped in creating the Marcus Fund in the name of his young grandson. From 2007 to 2010 he gave grants totalling ₹ 72 lakh to supplement self-efforts of Member Coolie families.

Growing farmer friendly fruit, fodder, fuel and manure trees on parched lands was a painstaking and challenging task that Coolie Sangha families took up with passion and enthusiasm. During the September rains every year, they dug 1 cubic metre pits and filled them with sand, red earth and manure. They planted Mango, Cashew, Silver Oak, Tamarind, Jamun and other saplings of their choice, and tied thorny branches to protect against grazing. Each year, they replaced saplings that had died in the summer heat and undertook fresh planting.

They installed 280 pre-fabricated tanks on their fields and hired bullock carts to haul water from ponds. Each sapling was hand watered with two buckets of water, twice a week, for 5-7 summer months every year. TNO, a research institute from the Netherlands, assisted with an experiment to place Rockwool slabs under the saplings, at the time of planting, to retain the hand poured water for a few extra days.

But whatever they did, more than half the planted saplings died every year due to the scorching heat and uncontrolled grazing. Many families gave up; new persons came forward.

We realised that saplings planted on dry lands just couldn't survive unless there was a systematic programme to support them with sapling costs, replacement, technical inputs, watering arrangements, et al. We conducted a very long and serious strategic planning workshop for ADATS Staff and Coolie Sangha functionaries, where we gleaned learning from all our ad hoc efforts up until then.