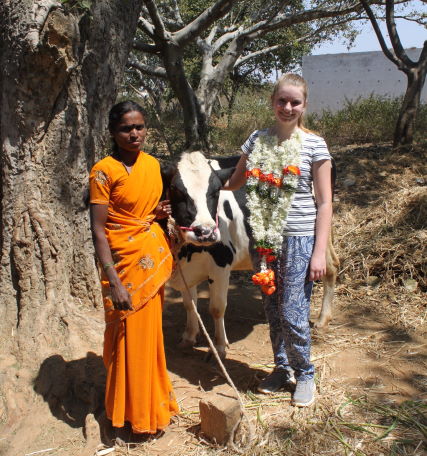 Alf Bjørseth of Scatec AS, Norway, set up a revolving fund in the name of his grandchild, to be managed by the Bagepalli Coolie Sangha in order to provide interest-free loans for Coolie women to buy milch animals and earn an income.

Mahila Meetings selected 65 single women who had no adult male members in their families and sent them to richer Ryots who already had cows to learn how to milk, feed and generally take care of animals. Then they were provided with crossbred cows bought from surrounding villages.

83% of the average of ₹ 30,221 borrowed by each woman was used to buy crossbred cows, 18% on insurance cover, 5% on fodder and feed concentrates, and 4% on transport, buckets, chains, etc.

Being the poorest of the poor, these women had to be handheld to manage such costly cows. ADATS Field staff did this through regular field inspections and were available to every single Loanee, day and night, by mobile phone. Women called in panic whenever something went wrong and our staff responded by taking a veterinarian, holding a special Mahila Meeting to iron out an issue, or simply talk till they calmed down.

Quite a few women succeeded as can be seen from the below testimonies. Many failed for a variety of reasons. Some didn't have enough adults in their families to take care of both, their children as well as the cow; others weren't able scrounge enough for an emergency; some cows simply got sick and died. The worst hit was those whose cows got sick and dried up. Fortunately, since we had insured for both, death as well as permanent total disability, not a single borrower got permanently indebted.

Mahila Meetings learnt that single women headed households could not, individually and on their own, overcome handicaps and prosper simply through the provision of capital and technical support. They needed to belong to a collective effort where all women participate — the weak, the strong, single as well as those with male support.

At the collective level, Coolie women discovered that they were quite capable of managing crossbred cows as a business proposition. The Celina Fund emboldened them to first participate in, and then completely take over the two Biogas CDM Projects which are today exclusively owned and managed by End User women.