Our effort to project dry land horticulture as Afforestation/Re-forestation and register it as an A/R CDM Project took 16 years from 1996 to 2011. The technology is to plant farmer friendly fruit, fodder, manure and fuelwood trees on the scattered rain fed holdings of Member Coolie families and wean them away from the dangers of timely rain dependent field crops.

The region receives about 560 mm of rainfall, but this is erratic and spatial. This is okay for hardy trees, but not for field crops that need timely and predictable rainfall.

After months of conceptualising the economic classification of the world in terms of Carbon Footprint and imagining a future where imbalances would be rectified through the transfer of resources from developed to under-developed countries, the Kyoto Protocol was adopted in December 1997.

Gripped with the excitement and enthusiasm of the Kyoto Protocol, the "gang" that had endlessly discussed, argued and debated in Bagepalli got down to developing a model to demonstrate how Greenhouse Gases sequestered here could offset emissions made in industrialised countries.

In April 1998, climate change activists registered the first avatar of this project, the "Bagepalli Tamarind Project", as an Activities Implemented Jointly (AIJ) Project certified by the DoE, US government. It was to plant tamarind trees on 1,000 hectares of Coolie owned lands. Science to calculate sequestration was provided by the Indian Institute of Science, Bangalore.

This was perhaps one of the world's first scientifically proven sequestration models, a precursor of sorts to CDM which was finally adopted in the Marrakesh Accord. But unfortunately, nothing came of it by way of resource mobilisation and actual implementation. 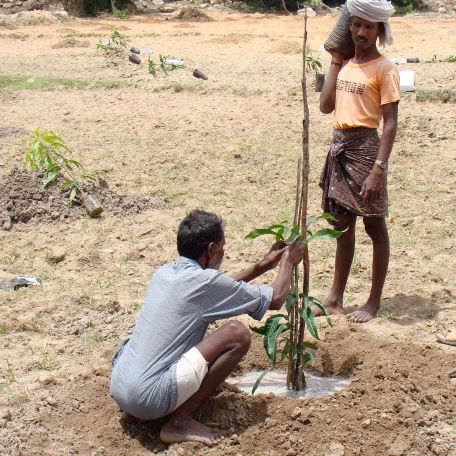 Nevertheless, we ploughed on. From 1996, Member Coolie families put aside small patches of their land to plant tamarind and mango saplings under what we call the "Own Efforts" project. Except for technical assistance to procure good saplings, ADATS did not have the money to help them with anything else.

We realised that saplings planted on dry lands just couldn't survive unless there was a systematic programme to support them with technical inputs, watering arrangements, et al. In April 2007 we conducted a strategic planning workshop for ADATS Staff and Coolie Sangha functionaries, and gleaned learning from all our ad hoc efforts up until then.

In mid 2007 we appointed TÜV SÜD, München, to validate the project. A lot of ground was covered in the desk study and first validation visit, but our PDD was nowhere near completion.

In September 2007 we tried to certify this project with the Climate, Community & Biodiversity Alliance (CCBA) but did not follow through for lack of funds. Please see the CCBA application.

Martin Schröder, DOE, observed that we hadn't followed the rigour that CDM demanded. We hadn't established proper tenure records for each Coolie landholding in the strict manner that the rigour of CDM demanded.

Immediately after the first validation, our IT personnel began working on the in- house development of a software to help in the process. 3 years down the line, this software was finally debugged and close to ready. Tristle Technologies developed a high value product from all this domain knowledge, which they market to other NGOs who develop land-based emission reduction projects.

GIS readings were taken of the multiple corners that each plot comprised. Latitude/ Longitude readings were placed on GPS maps. The shape of each discrete plot was rechecked in the field. Village maps were overlaid on Google Earth to ensure authenticity. The exact area was digitally calculated. Title Deeds (Pahanis and Kathe records, Saguvali Chitis, etc.) were obtained, cross-checked, scanned and fed into our A/R Preparation solution.

The delineation of distinct parcels of land where the A/R CDM would be implemented involved painstaking and time-consuming efforts.

Process (genesis of an SOP)

We took GIS readings and fed it all into this software but found huge errors. Plots were misshapen, they overlapped and even their orientation was warped! It took ages of field tests, trial and error to get it all right.

Missing out on even small and seemingly inconsequential steps led to disaster. Calibration settings of the handheld GIS reading devices had to be just right. Landowners had to plant stones on every corner of their plots and not just "guess" their boundaries. Machine numbers, Land ID's and Reading Numbers had to be precisely recorded. After 6 months of pure slog in village after village, over 60,000 readings had to be deleted, literally bringing tears to the eyes of Field Staff who had taken those readings. And every time the possibility of an error was detected, the software had to be recoded to digitally recognise it and prevent wrong recording.

Eventually, when we did get it right, a very detailed process map consisting 5 Activity Processes comprising 33 Tasks was finalised and we started all over again.

Every single ADATS Staff — Field Workers, Mahila Trainers, Case Workers and Extension Workers — were put on the job. When it was found that more hands were needed, 5 more Staff were appointed, especially for this task. Dozens of village volunteers were recruited and paid ₹ 10 for every plot that they successfully recorded. They went to each and every one of the 12,347 plots and walked on their boundaries for an average of 3.5 times!

Alongside, the carbon stock on the plots was also recorded — i.e. the number of species of existing trees, their girth, height, location, etc. On average, each discrete plot of land has a little under 5 trees, and each acre has about 3 trees.

The second validation by TÜV SÜD took place in 2010. In 2011, we finally registered one of the world's first Afforestation/Reforestation CDM Project to plant trees on 8,933 hectares of rain fed dry lands belonging to 8,107 small peasants. Click here for details on the UNFCCC website.

In 2015, we transitioned the project to Gold Standard and have since undertaken two Verifications. 91,092 GS VERs have been issued to date.

The reason we made this transition was because UNFCCC registration would have allowed us to calculate sequestration only from May 2011. This would have excluded all those farmer families who had planted 1,25,099 saplings in the first 12 years of the programme. 33% of these saplings have become big trees and sequestered 17,080 tCO2-e as of today.

Gold Standard, on the other hand, recognised the start date of the programme from when we registered as an Activities Implemented Jointly with the DoE, US government.