Climate Change has a significant impact on agricultural activities in semi-arid drought prone regions. With scanty, erratic and spatial rainfall, field crops fail. From the mid 1990's we suggested that Member Coolie families plant fruit and fodder trees on their scattered rain fed holdings and switch from risky, rainfall dependent field crops, to more hardy tree crops that do not need timely rains. 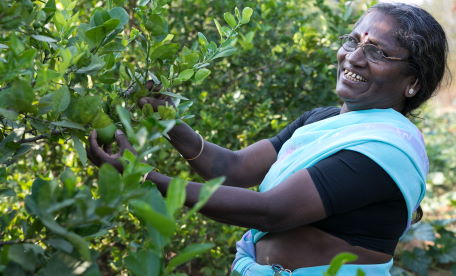 For 13 years, from 1996 to 2008, they put aside small patches of their land to plant tamarind and mango saplings. Except for technical assistance to procure good saplings, ADATS did not have the money to help with anything material. Project implementation was self-financed by 1,296 participating farmer families from 155 villages. With their own resources, they planted a total of 73,853 saplings, but the survival rate was very low at 30%.

Growing farmer friendly fruit, fodder, fuel and manure trees on parched lands was a painstaking and challenging task that Coolie Sangha families took up with passion and enthusiasm. During the September rains every year, they dug 1 cubic metre pits and filled them with sand, red earth and manure. They planted Mango, Cashew, Silver Oak, Tamarind, Jamun and other saplings of their choice, and tied thorny branches to protect against grazing. Every year they replaced saplings that had died in the summer heat and undertook fresh planting.

Alf Bjørseth, a private philanthropist from Norway, supplemented their effort with grants totalling ₹ 72 lakh from 2007-2010.

They installed 280 pre-fabricated tanks on their fields and hired bullock carts to haul water from ponds. Each sapling was hand watered with two buckets of water, twice a week, for 5-7 summer months every year. TNO, a research institute from the Netherlands, assisted with an experiment to place Rockwool slabs under the saplings, at the time of planting, to retain the hand poured water for a few extra days.

But whatever they did, almost three-quarter the planted saplings died every year due to the scorching heat and uncontrolled grazing. Many families gave up; new persons came forward. In the five-year period from 2009 to 2013, a total of 67,352 saplings were planted. Only 16,825 (25%) survived. The cumulative Survival Rate of the then 18 year long effort dropped to 16%.

After that, from 2014 to 2018 came the time of serious reflection. We compiled the year-wise data of only those who had succeeded in raising at least a few saplings into full grown trees to include in this latest avatar of the Afforestation Project which we re-christened "Farm Forestry".

We could do so because, from the very first planting in 1996, we had strictly monitored survival and growth of each cohort on each discrete plot. A Cohort is defined as saplings/trees of the same species, planted on the exact same date, on a particular discrete plot. As a result, we were able to corelate survival rates to planting years, species, soil type, irrigation and gender category.

Annual Planting and Survival as of 3 October 2021

After re-registering, the project has undergone two Verifications. 91,092 GS VERs were issued to 1,078 farmers from 217 villages.

ADATS negotiated with parties who needed to offset their emissions, and got the best possible compensation from those industries and institutions who wanted to but were unable to themselves reduce GHG emissions.

The below table shows the vintage years of issued VERs:

96% of the ₹ 6.18 crore received as carbon revenue for these 72,868 GS VERs was distributed to participating farmer families, based on the survival rate of trees on their fields (carbon stock they had sequestrated), as a reward for the environmental service they have provided through their heroic battle against Climate Change. 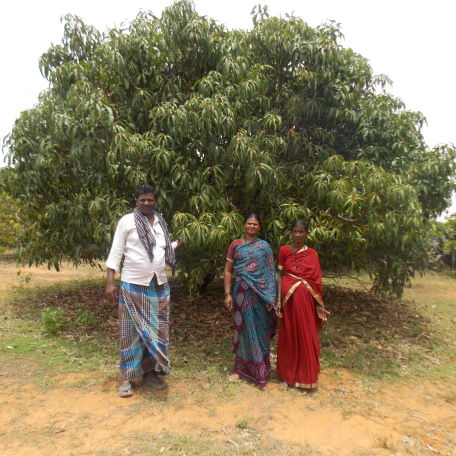 ADATS realises that grit and determination alone are not enough. Own efforts would go so far and no further. Small and poor peasant families do not have the financial resources for capex and also to tide over unpredictable weather variances.

After critically analysing our 25 year long experience, we adopted a 5 year strategic plan in September 2019 in order to scale-up proven and demonstrated climate resilient alternatives to subsistence cultivation using farm forestry that sequesters GHG and provides livelihood opportunities to local communities, as an altered land-use practice, and integrating small and poor peasant families into the climate friendly new-age economy of tomorrow.

After seeing the flow of carbon revenue at the end of their 25 year long struggle, many more families decided not to wait till ADATS got external funding.

In 2019, another 250 farmers invested ₹ 45,03,125 of their own and planted 45,795 saplings on about 250 plots. They negotiated with MG-NREGA officials in their respective taluks, submitted necessary records, and applied for subsidies. A few got a part of their expenditure reimbursed; the rest are waiting for the pandemic to get over and regular government activities to resume.

SayTrees, a Bangalore based NGO who leverage CSR funds to create urban and rural forests, came forward to contribute to the heroic effort of Coolie Sangha families. In June 2020, immediately after the lockdown, they supplied 47,119 high quality fruit tree saplings which were planted on 286 discrete plots. In June 2021 they supplied yet another 93,168 for fresh planting as well as replacement.

The current (cumulative) Survival Rate is at 61% as on October 2021. For ADATS, the challenge still remains to find the Human, material and financial resources to continue support and quarterly monitoring of all 1,99,570 saplings/trees.

With the additional ₹ 4.4 crore distributed to 1,024 participating farmer families as carbon revenue in December 2021, interest in switching to farm forestry is bound to pick up even more.